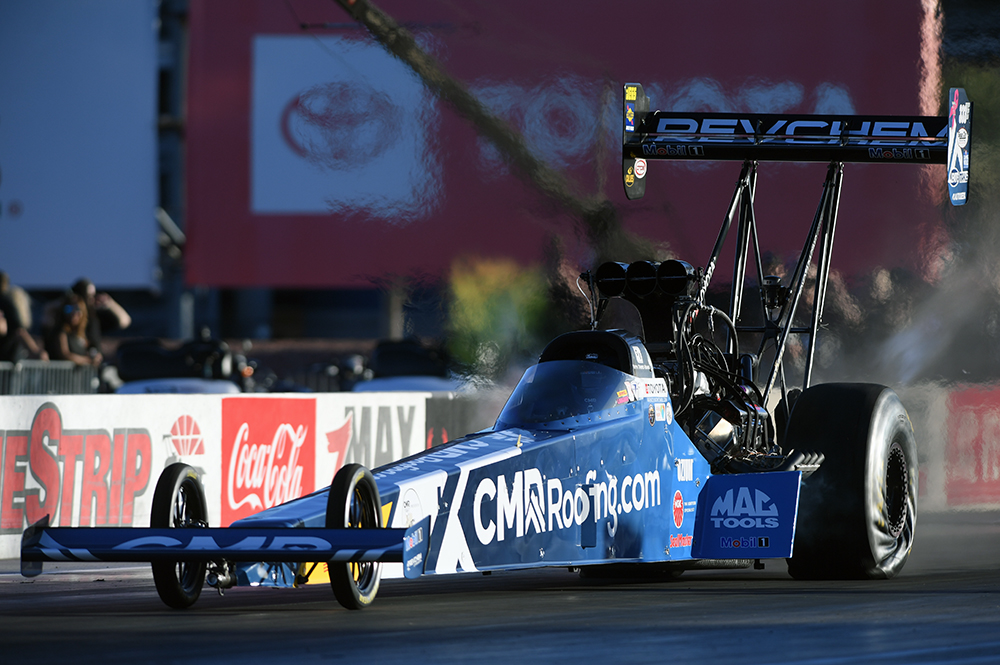 The Revchem-backed NHRA team Kalitta Motorsports will be heading to the east coast this weekend, as they gear up for one of the most interesting races of the season: The Pep Boys All-Star Callout. Members of the Revchem staff will also be present, continuing their marketing and technical support sponsorship with Team Kalitta. See the press release below from Kalitta Motorsports for more details on the upcoming event at Gainesville Raceway.

YPSILANTI, MI (March 9, 2022) — Eight of the best Top Fuel racers in the world, including both Kalitta Motorsports drivers Doug Kalitta and Shawn Langdon, will be competing for $130,000 in bonus prize money this weekend in the Pep Boys All-Star Callout event during the NHRA Gatornationals. Two weeks ago, at the Arizona Nationals, the final event to earn Pep Boys Allstar Callout points, Kalitta moved into the No. 7 Allstar position with a No. 1 effort in Phoenix and Langdon slid into the No. 8 Allstar position with his No. 7 qualifying effort at the national event. Friday afternoon in a unique ‘callout” format No. 1 Pep Boys All-Star qualifier Steve Torrence will choose his first round opponent from the seven competitors in the field regardless of qualifying position. Following Torrence the No. 2 qualifier Brittany Force will select from the remaining six drivers unless she is selected by Torrence.

“The callouts will make this a fun event for sure, and you won’t know who you are racing against until the picks are made,” said Langdon, who will be racing the CMR Construction & Roofing Top Fuel dragster this weekend. “I feel good about my position because there is no pressure. As the No. 8 driver I will either get picked or be in the last pair. I am just looking forward to putting on a good show for the fans. There will definitely be some strategy involved for sure.”

Langdon won the 2013 Traxxas Shootout Top Fuel event defeating Steve Torrence in the final. He has appeared in four Top Fuel specialty events in his career with a 5-3 career record. He is 1-0 in final rounds.

“I love the specialty races going back to the Budweiser Shootout and the Traxxas Shootout,” said Kalitta, driver of the Mac Tools Top Fuel dragster. “There are seven other really tough drivers in this thing and you will have to be ready if you want to get those three win lights. I am glad Shawn and I made it and we will see what we can do on Saturday.”

The FOX broadcast network will have complete coverage of the Pep Boys NHRA Top Fuel All-Star Callout beginning at 2 p.m. ET on Saturday, March 12, which will also include live action of the final round.

Sign Up Now
For Promotions Delivered Direct to Your Inbox.

Revchem Composites is committed to increasing the productivity and profitability of composite fabricators.